OneDrive is a better deal, 7 bucks a month for 1 TB. I think Google is like 10 bucks a month, so a whooping three dollars cheaper. Looks like OneDrive has a 100 GB for 2 bucks a month too now.

Would take to long to upload everything. And I get free storage for my JPGs.

You’ll be waiting a long time for it to download patches and apply them. Unless you have a faster internet connection then me. Unfortunately I can’t afford faster internet. And if I could, I wouldn’t pay for it, cheaper in other countries. America is all about money.

It closes when I open it. Says something about syncing in the start menu. Apparently you can’t open it though.

Before I’d be using around 8 GB. Might of had an old version of VMware Player, it’s usually running in the background, it is now too.

I got my light bulbs changed in the living room. The light takes two light bulbs. He just had to go get a step ladder and the light bulbs.

Weird having light in here, didn’t use to.

Update Eyes still feel funny. Probably have to get use to there being light now.

He replaced one part on it. It’s under 80 degrees now. Not sure its as good as the one in the hallway though. It’s a half ass fix, like I would do.

Sweet, might not need a new phone now. But what am I supposed to buy then? Nothing? Boohoo.

I already had my phone rooted, super easy to do, you just click one button after opening the program. Now I don’t need a new phone for years.

It’s only 81 degrees in my apartment. Tonka is hot. I was having trouble falling a sleep last night. Need to unplug some cables that are going by it. Something might get broken if I leave them plugged in. I should ask them to replace it with the one in the hallway. Then they don’t have to come back to look at it some more. Only problem is the maintenance guy might be done working today. If he comes after 1 pm, he doesn’t want to do anything. So most likely going to the office at 1 pm won’t do any good. I take a big dump in the morning, then I usually walk the dog, then I take a shower. So if he comes tomorrow, I’ll be doing something.

According to engadget.com, Microsoft is planing to allow you to stream PC games to the Xbox One.

That’s good news, if I ever assemble a new computer, I can get a slow AMD video card. Sell the SHIELD and buy a Xbox One. Will it have controller support in some games like the SHIELD?

To cheap to buy a Xbox One. Already have a PS4. Maybe Sony will release a program for Windows to do the same thing on the PS4.

That the person I bought the LG G3 knew there was a problem with the phone they sold me. They probably used it, and packaged it back up, and sold it as new.

Don’t buy a phone on eBay. Save up and buy from Amazon or a carrier.

You know what’s funny? Phone is being slightly faster. Guess it found out I was going to replace it.

Looks like the LG G3 throttling itself is common. Should of searched google for LG G3 lag before buying it.

Looks like the Windows 10 upgrade made Firefox faster. Guess Windows is finally catching up to OS X.

Has better specs then the Moto G. But the Moto G doesn’t have very much crapware on it. One of the reviews says the ASUS has a cheap feeling. The Moto G is a good phone, probably not a cheap feel, it would cost less most likely if it had a cheap feel. And you can change the colors on the Moto G, if you order from Motorola.

ASUS might be a pain to root. Having to click more then one button is a pain.

Of course I can’t decide which phone. The Moto G would be slightly cheaper. Really only need a phone as fast as the nexus 4. Or wait until September and get the Moto X Pure Edition. But that phone is overkill for me.

Think I’ll get the ASUS phone. Should be as fast as my LG G3 is supposed to be, if it didn’t throttle itself.

Cheaper then a tablet. And it might not throttle itself like my LG G3. I think I can return it, if it throttles itself.

It’ll cost about 250 with a case. The video on the new Moto G might be slightly worse then the G3’s. Should be better if it doesn’t throttle itself.

That would explain why it’s slow most of the time. It got late and cooler outside. No AC anymore. Does the Moto X Pure Edition throttle itself most of the time? Guess I won’t know until it’s out. The Moto G might even be faster. The reason my Nexus 4 is faster then my LG G3.

Tried installing it two times, usually it works the second time. Now updating the driver using device manager. Maybe that will work. It changed the resolution for me though.

That didn’t work. I tried removing all the NVIDIA stuff in Add or Remove Programs, but that failed.

And I rebooted, works now. Can’t optimize games though using GeForce Experience, apparently the NVIDIA 970 is to old. Their site says it’s supported. Might need to reboot again.

Rebooting didn’t fix it. No optimizing games for me. I’ll just use the default settings on any new games that it picks for me. No biggie.

Windows 10 might change that though. There’s not much difference in browsers in OS X. At least not speed wise.

Text is easier to read, not sure if it’s my Benq monitor, or OS X.

And a VPN service would be too. You’d need the VPN, no idea who else is using the open wifi. Can my other router route all traffic to a VPN? I think it has dd-wrt on it.

I just looked up VPN for dd-wrt, to complicated. I’ll keep paying 50 dollars a month for my connection.

Found instructions for re downloading here. I thought it was over 3 GB. Maybe it’s compressed. 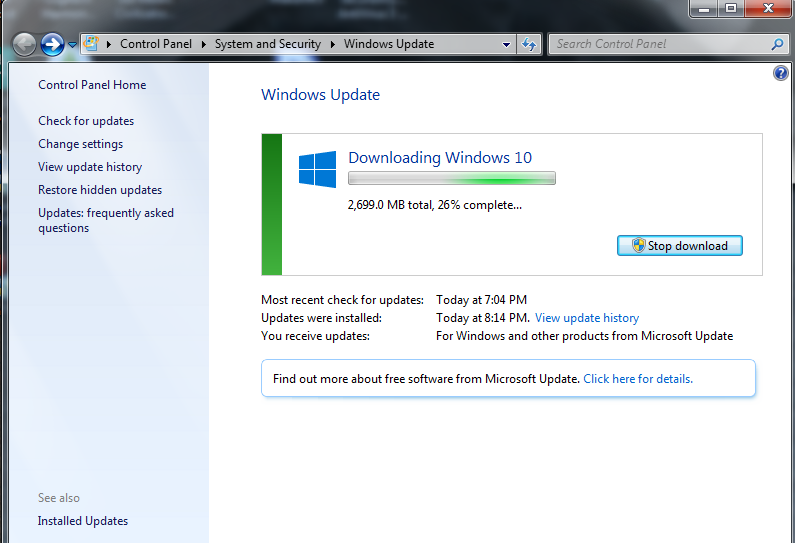 Update It finished downloading. Now it’s preparing it for installation. I read it can take thirty minutes. I might fall a sleep before it’s done.

Can’t find the boot.wim file, I can’t find it either. 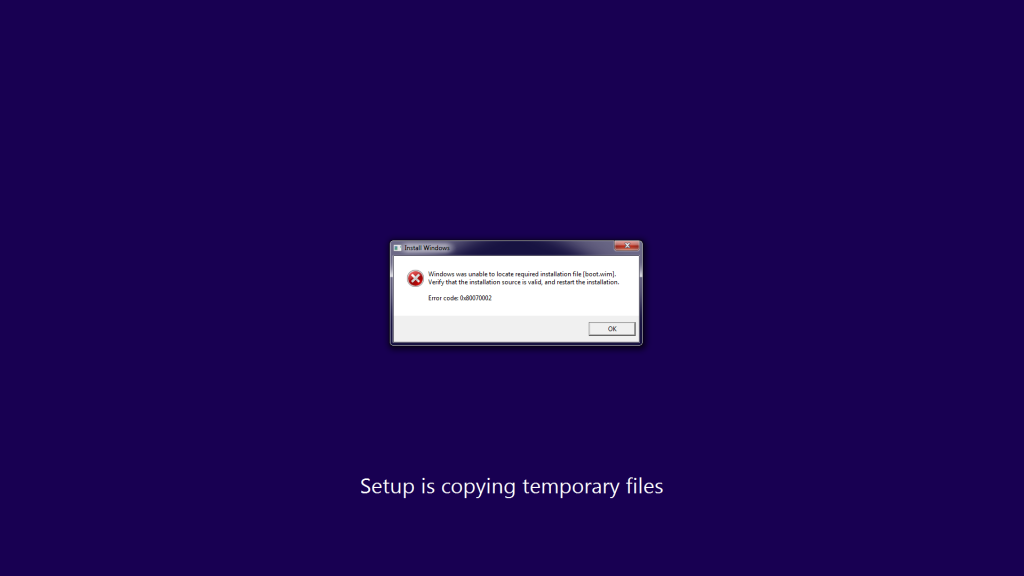 Putting it on a thumb drive won’t work, you need the boot.wim file. I guess windows creates it somehow.

Should of backed the folder up again.

How do I re download it? Or download a data recovery program and undelete everything. Then change the date to the 29th, and open that exe again.

There’s another failed install of the Windows 10 upgrade. Does Windows store the files somewhere else?

According to tenforums.com somebody’s computer is already upgraded to ten in the USA. Probably not true. They only have one post. And they joined in July, most likely today. So they probably looked up why it isn’t working and found that forum. They are a troll.

I’ll be in bed most likely when the notification pops up.

And you can’t recover files from a SSD apparently. I might be able to get some of the files back that I copied to my backup drive, it isn’t a SSD. Not all the files could be copied though. Think I’ll just wait.

Update Instructions for re downloading can be found here.

Might install, Windows Update says it is downloading Windows 10. Last time it downloaded in the background and Windows Update didn’t say anything. I have a slow connection, so it’ll be a while. And Microsoft might be getting hammered.