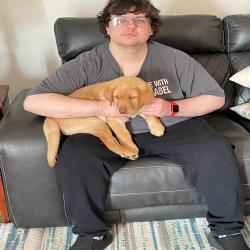 Bodhi’s brother came home today, Bodhi isn’t exactly happy about it. Came from the same breeders, I think the same mom and dad.

My mom’s dog, not mine. I can’t have a puppy. Too much work.

He likes chewing on everything, even the couch. And my pants. I was eating ice cream, and he wanted some. He put his paws on the couch, trying to get up there probably. Lilly puts her paws on the couch like that, but she’s a little dog. Lilly doesn’t want to play with him.

Bodhi barks a lot with the puppy.

He barked less at some other people that came to her house. He didn’t even bring me a toy. He might be frustrated, cause he doesn’t know how to play with the puppy.

Might mean Bodhi will play less with me, isn’t that a good thing? Then I can sit silently and do nothing.

If the puppy sits by you, he doesn’t want pets, he wants to chew on you. I know because I pet him when he did that, and he started chewing on me.

I was trying to get him to shake or put his paw up, well I put my hand on the ground by him, and he thought it was a chew toy. He did put one paw up, then the other, didn’t have any treats though to try and reward him.

Can you even train a puppy right away? Potty training you can. But he doesn’t even know his name. And the way I get dogs to come to me, he doesn’t understand. So good luck teaching him to shake yet. He’ll learn it later, but not yet.

He likes kids, but I think the breeder has kids. In fact, he was their sons favorite puppy. He gave my nephew kisses.

Bodhi will give me a kiss, not sure how big of a kisser Bodhi is though. He doesn’t do it that often. But Sofie might have given me a kiss once. And I don’t think she gave anybody kisses. It was either a kiss or her nose, not sure which.

Meiko gave kisses, he trained me to walk with my hands up, but he’d get you if you forget. Or just lick your elbow. He was good at catching flies too. I think flies pissed him off, and he’d catch em and eat them. His mouth was perfect for catching flies.

Tonka would kiss babies when she was feeling better and younger. You could tell her to kiss the baby, and she would.

She did give me a bunch of kisses on my arm or arms. It was I think a couple months before she died. That’s why I think she knew what was going to happen. She needed to tell me she loves me. And that she knows I love her. That’s the entire point of everything, is love.

Somehow Buddy was fine with all the dogs we got. Not sure he played that much. He did like me petting him. Got Buddy, then Meiko, then Tonka, then Chibi. Chibi had a problem, but none of the big dogs did.

Buddy would chase cats. But must have eventually been fine. Well, the cat I think he pinned down, eventually moved out. Not sure how many times he did that. If they ran he’d chase them.

He couldn’t get the annoying cat out of my room, he’d try to get the cat to run away, but he wouldn’t. Then I had a cat meowing, and a dog whining. That cat would also knock stuff down if you didn’t get up and let him outside. He might have only tried chasing him out of my room once, he probably didn’t see the point in trying again.